In this post, we are going to discuss how television affects kids so that you could decide whether it is wise to let your kids watch T.V for more than a few hours. 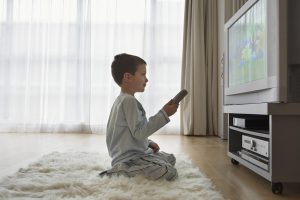 Usually, a parent is always worried about their kid’s habit of watching television because the old way of thinking criticizes watching T.V as a harmful thing for children. People have a notion that television is not a healthy thing for the brain development of children.

But is watching T.V really that harmful to kids? Should you let your kid watch T.V without any restrictions? For how long should you allow your kid to watch television? What kind of shows should you let your children watch? We will be answering all these questions in this post but first, we would like to debunk the myth that television is always harmful.

Television Is Not a Bad Thing

Contrary to the popular belief that watching T.V is a waste of time and unhealthy for kids, research work has shown that children can learn a lot of things by watching television and so it is a good tool for educating the young minds. 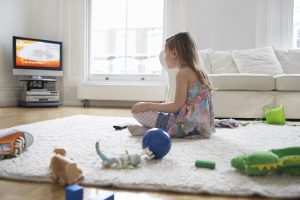 Apart from this, television affects children’s mind in a lot of positive ways like it increases their ability to imagine, teaches them about the society, spreads general awareness and generates curiosity.

Kids of today’s generation are proving to be smarter than the previous due to the knowledge they gain from their exposure to media. However, it matters a lot that what kind of shows the kids are preferring to watch otherwise T.V shows can also negatively impact the mind of children.

The technological advancement has its own advantages as well as disadvantages, children have learned a lot from media whereas they have also became an addict to video games and television.

Now we are going to talk about the disadvantages of watching television when it comes to kids.

Yes, In Truth Television Can Be Harmful to Kids

Although we have discussed many points above on the advantages of watching television, the disadvantages are so many that all the positive points become insignificant in comparison to the negative ones.

First of all, television can become a big barrier to the growth of a kid’s brain and it can slow down the brain development process for children below 2 years of age. A developing brain requires real-life scenarios and interaction with people to learn some of the most fundamental skills, so if a kid gets engaged in watching T.V shows then they may miss so many opportunities to build some of the very essential skills.

Here are some disadvantages of children watching television:- 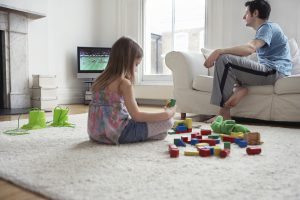 Since the day television has made its way to our living rooms, kids have become less interested in outdoor games and physical activities. Spending a lot of time in front of T.V has increased the rate of obesity among kids which is a big problem the world is facing right now.

Also, too many hours of screen time leads to various kind of vision-related problems in kids.

The more a kid spends time watching T.V the less they interact with other kids and people. Due to their mind obsessed with television shows, kids stop to socialize which leads to the weakening of their social skills and further it can become a serious psychological problem in future. This may also lead to low self-esteem in children.

There is a time for everything and there is an age which is adequate for knowing certain things. But due to the increment of inappropriate content in television these days, kids develop the curiosity for things that are way too complicated for their mind to properly understand.

We do not have control over what is broadcasted on T.V neither can we always keep an eye on what a kid is watching. The exposure to content that consists of matters like sex, violence, drugs, etc. can cause an unnecessary disturbance as well as untimely curiosity in the younger minds which can be harmful to their psychology. 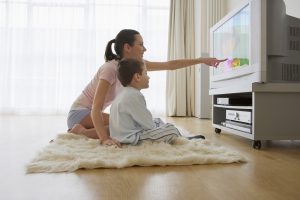 There is a hypnotic effect of television commercials which is used by the companies to increase their business and the worst part is that these advertisements can highly influence the minds of children.

Television commercials cause kids to believe in everything that is shown to them which leads them to demand products that are not necessary for them and also unhealthy in many cases.

Although we have mentioned that television is good for the development of imagination in kids but overexposure to it can make them less creative.

Not being in touch with real-life scenarios and nature leads a kid to become less creative since their mind has already been filled with the content they watch on T.V.

Children who spend more than 2 hours watching T.V start to lose their ability to focus on other things, this especially leads to their lack of focus in classrooms and sports.

Watching too much television can cause focus-related problems in kids which can also increase the probability of disorders like ADHD. The lack of focus not only affects children’s academic performance but it also makes them poor in sports.

Here are a few things you can do to avoid any of the above-given problems:-

1 – Supervise What Your Kid Is Watching on Television

Choose the T.V shows for your kids that teaches them something useful and helps to increase their awareness of the world. There are a lot of shows which are intended for educating kids and to give them moral lessons.

Television shows are not that a big deal for the health of children unless it is done in extreme. So we advise you to fix proper hours in which your kids can watch their favorite shows and then turn the T.V off without allowing it to become a bad habit. 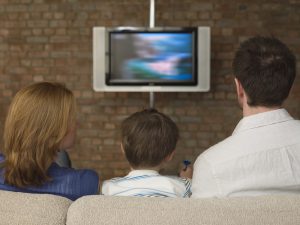 When you watch television with your kids you have full control over what they are watching and for how long they are being in front of the screen. When you are present with them while they are watching T.V you can answer their queries and teach them proper lessons using examples.

There is also an emotional factor associated with this, watching their favorite shows with them sends a subconscious message to them that you love them enough to take your time to take interest in doing what they love.

For further information on this subject, we recommend you to read – Children and Television – Fifty Years of Research

Here’s a video where a pediatrician talks about the effects of televison on the minds of young children:-